Yes, I know it’s been a minute since I’ve posted here, especially anything in the music category.  But after seeing all the end of year list of best albums and best songs, I decided to go a different direction and list the best concerts I attended (and didn’t attend) in 2015.

My taste is not your taste, so deal with it.  But this is what I saw and loved in the past 12 months. 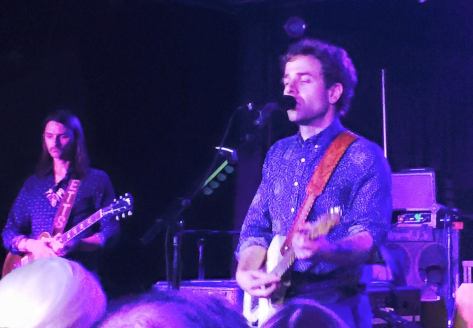 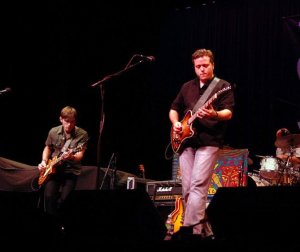 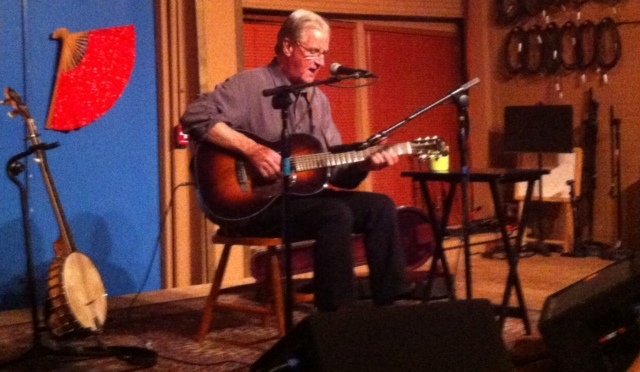 Tuesday night, I was able to scratch another item off what I refer to as the “catch up” list.  I detest the overused term “bucket list”.  To me, making up for lost opportunities is catching up and that’s what I did in seeing one of this country’s musical treasures, Geoff Muldaur, for the first time in the intimate setting of the Blue Door.

He isn’t a household name outside of music aficionados like me, but rather ‘famous by association’.  His sister is the actress Diana Muldaur, who still turns up on the odd “Murder She Wrote” rerun and played Dr. Pulaski on “Star Trek: The Next Generation”.  His ex-wife and ex-bandmate, Maria Muldaur, became an ‘80s FM radio darling with her big hit “Midnight at the Oasis” and the salacious cover of the Swallows “It Ain’t The Meat, It’s The Motion”. He was part of the Jim Kweskin Jug Band in the ‘60s and Paul Butterfield’s Better Days in the ‘70s.

After recording a couple of solo albums in the ‘80s, he ‘disappeared’ for 17 years, but was really hiding in plain sight.  While on a working sabbatical, Muldaur scored music for movies and TV, played on other people’s albums and joined the corporate world.  Returning in the late ‘90s, he began a path of helping audiences rediscover blues and jazz music from the depression era through his contemporary interpretations and he’s now combining his infrequent public appearances with creating arrangements for an orchestra in the Netherlands.  Refreshingly, at 70, Muldaur plays because he wants to and not because he has to.

Which brings us to his Blue Door show.  Through the years, Muldaur’s trips to Oklahoma City have been fraught with weather issues.  In 1999, he was scheduled on the evening the tornado struck Moore.  In 2008, he had to delay his Blue Door appearance for one night because an ice storm made it impossible for him to get out of the hotel parking lot.  But this time, he missed the freak April snow flurry by one day and followed the night of the blood moon with a flawless two-hour solo performance in front of a whopping crowd of 28 – which eclipsed his previous two climate hampered appearances.

Don’t feel bad for Geoff.  These were people who were really into his music, some coming all the way from the Far East, where as the saying goes he is ‘big in Japan’.  He was able to weave some time-tested stories on the background of songs from Sleepy John Estes, Blind Willie Johnson and Vera Hall, as well as late bandmate and tour partner Bobby Charles, into a pastiche of blues, folk and classical tunes. It was like a fireside chat with the curator of these musical genres. And even though he is more of an interpreter or arranger of ‘other folks music’, rather than a lyricist, one of the highlights of the show is his own composition “Got To Find Blind Lemon, (Parts 1 and 2)” about the search for Blind Lemon Jefferson’s grave in East Texas.  Enjoy it here from a performance a couple of years back.

Getting set to do some recording next month, Muldaur has also taken several Tennessee Williams poems and set them to traditional music with startling effect. It’s part of his continued reimagining and reengineering of musical forms that make what is old new again.

I surprised Muldaur during the introduction of his version of Blind Willie Johnson’s  “Trouble Will Soon Be Over” when he asked if anyone had ever heard of Philippe Wynne.  I answered in the affirmative and added that Wynne was the lead singer of the Spinners (Rubberband Man, Could It Be I’m Falling In Love, you know).  Astonished, he said I was the first person at any of his shows that had known who Wynne was.  That established my bona fides and allowed me to have a private discussion with him following the show.

It seemed to me that a great part of his show was spent educating audiences on the origin of many of the tunes he performed, sort of a college of musical knowledge.

“I don’t know if I’m trying to educate, maybe I’m a ham,” said Muldaur. “I like to talk about this stuff, I’ll tell you why.  It’s because I’m talking about worlds that don’t exist anymore.  And it was so yesterday for me.  All of a sudden it’s a whole other sack of potatoes, man. To tell any of these stories, it means so much to me.”

Muldaur and Kweskin kicked around the Northeast in the early 1960s, discovering old 78RPM records of the ‘20s and ‘30s blues men (and women) to learn their chops. Back then, about all you had were the John Lomax field recordings, and the American rediscovery of the later blues of Muddy Waters, Howlin’ Wolf and Willie Dixon, among others, was just beginning. You had to scour the record stores to find obscure recordings and felt like Columbus when you did.  This often caused people to miss entire genres of music while they were just learning the first one. While Muldaur was in the jug band and folk explosion, something else was happening in another part of the country.

“I didn’t even get around to Motown until it was almost over and then I fell in love with James Jamerson, Benny Benjamin and then I went berserk” Muldaur admitted. “ But I had to go through all the blues and all my jazz thing and then all of sudden, I said ‘wait a minute’.  The words didn’t do it for me, but man did these players do it, so I got into that. It’s just sort of endless and the whole gospel thing produced probably the greatest singers we ever had.”

Rather than complain about golden eras of music being smothered by the musical morass that confronts the public these days, Muldaur says to find the abundance of good  music being made today and embrace it, even though it will never replace the special talents that have come before.

“When I started playing country blues guitar, the young white guy in 1960-1961, we don’t think there were more than 120 guys in the United States that did that. That’s high,” Muldaur said.” Now there are 120,000 easy.  There’s this incredible proliferation of all styles, all techniques.”

“Let me give you an example. How many flat-pickers since Doc Watson came up, how many have played phenomenal, fast, flat picking?How many have whipped that guy?  Not one,” said Muldaur.  “There were these people and the thing that you can’t put your finger on, other than a few technical things, the genius and the magic of these people and you can’t repeat it. It becomes a classical exercise. Music is a very magical and mysterious thing.”

Another reason that Muldaur plays a handful of shows in the U.S. and Japan each year, along with special collaborations with The Kweskin Jug band and former Better Days partner guitarist Amos Garrett, is to remind the audience of the vast body of tremendous music that has been created during the past century.  And that, sadly, its creators have almost all passed.

“Everyone who invented all this music is gone.  I mean, B.B. King is what, 88? The last inventor of a blues style,” Muldaur said. “I’m not a curmudgeon about it, it’s just these things happen when they happen.  I was very lucky to catch the last third of the zeitgeist. So we caught a few of these guys. I wasn’t hanging out in Harlem in the Big Band era.  Right now, I’m steeped in classical music. That’s not going away, you’re never going to run out of that.”

He doesn’t decry the age of Spotify and Rdio, where people can stream millions of songs without purchasing them, to the detriment of music sales, but instead, he is happy that there is a new audience for many of these recordings and a new way to learn the history of what came before.

“We’re all lucky when we get to hear special music. And these days, we’re not in a golden age, but we have billions more notes being played on a daily basis, but you have to be discerning and keep an open mind,” said Muldaur. “You find this person and you say ‘oh my God, that person really has the real stuff right there’.  And you never know when it’s going to happen so you have to be open.”

There is a downside to the proliferation of music seemingly available  everywhere. Each day,  we’re bombarded by YouTube videos of eight-year old guitar shredders and pint-sized vocalists who are note and pitch perfect.  But often they just seem to be mimicking what they’ve heard and not really feeling the notes.  Something akin to soulless robots.  That is something that has also caught Muldaur’s attention.

“Everyone can go on the Internet now and get anything by anybody,” he says. “How come they don’t get the spirit of it when they play it? “

When his Oklahoma City show was announced, I was fearful that age might have stripped Muldaur of his vocal range and styling.  I even asked Blue Door owner Greg Johnson a few months back “what’s he sound like, what kind of shape is he in.” And when Muldaur arrived, I was pleasantly surprised to see that he looked like a marathon runner and much younger than his age.  Then when he started singing, it was obvious that he had lost nothing and might even sound purer than some of his old recordings.

He admits that 17 years of not grinding through one-nighters and club dates preserved his voice, something that those who continued with life on the road can’t say.

“It’s just a technical reality. I wasn’t out there beatin’ the boards for 17 years, so my voice held up.  I can still sing.  I’m not getting any younger, but I can sing,” said Muldaur. “That’s why I can’t make disparaging remarks about  people – and you probably know some of who I’m referring to – that are out there croaking, but I’m telling you, they got there because they put out for a lot of people over many years and I took a lot of time off.  I also spent a lot of time in the gym and hiking and bird watching.  Well, after those years with Butterfield I had to.”

And then he regaled me with a few stories of Bobby Charles, Reverend Ether (Ronnie Barron) and life on the road. Preserving the history and keeping the music  alive.  That’s important to Geoff Muldaur and it’s important to me. Thanks, Geoff.