The NBA Playoffs have just begun and Blake Griffin of the LA Clippers is being mentioned as one of the top three candidates for league MVP (of course we all know who’s number one).  Even though he is now public enemy #2 to OKC Thunder fans (how could I forget Patrick Beverley), there was a time when Blake Griffin was considered to be the savior of the Oklahoma Sooners basketball fortunes. Let’s go back to 2006, just before Blake’s senior season in high school and before anyone knew exactly how good he would turn out to be.

New Oklahoma basketball coach Jeff Capel was in need of some good news in early May, shortly after taking over the reins of the Sooner program. After all, in the month after his arrival, he had seen three top ranked recruits bolt from the program and had the NCAA ruling on his predecessor’s indiscretions looming over his head.

Then, Capel got the word that would suddenly change the mood of all Oklahoma basketball fans.  He received an early oral commitment from the top junior in the state and one of the top players in the nation – 6-9 power forward Blake Griffin from Oklahoma Christian Schools.

Griffin’s commitment immediately gave Capel’s regime credibility and with the commitment of 6-5 Cade Davis of Elk City following closely behind, it showed that the new coach was serious about protecting his home turf – something the OU basketball program had problems doing for the past few years.

For his part, the happy-go-lucky Griffin didn’t think much about the impact he had on making a statement for the new coach.  He was just excited about becoming a Sooner and about ending the recruiting process.

“I had planned on waiting and taking a few visits during September and just kind of wait it out a little bit, but I really felt like once I got to know coach Capel a lot better, I knew that OU was the place for me”,  said Griffin.  “I just kind of wanted to get it out of the way and play my senior year and not worry about it.  I just wanted to go out and have a fun summer.”

But the importance of the commitment was not lost on one current Sooner player – Blake’s older brother, Taylor, a 6-7 sophomore-to-be who will be counted on to emerge as a major factor on this year’s team.  He knew that Blake’s decision was a huge boost to Capel, as well as the entire OU program, and that it put the focus back on the future of Sooner basketball instead of on the recent unsettled past.

“I think it was all those things you said.  It was huge for Coach Capel”, Taylor said. “He had a lot of trouble with the recruits that were leaving and I think that was a big commitment right there. Blake was getting tired of all of this and he was ready to get it settled.  I was tired of hearing about all of the negative stuff.  It’s nice to get everything down and out of the way so he can look forward to his senior season and I can look forward to our season here.”

The commitment also will reunite the Griffin brothers, who teamed for two state championships at OCS while playing for their dad, Tommy, who is one of the most successful coaches in Oklahoma high school history, winning seven state titles at OKC Classen, OKC John Marshall and OCS.

The elder Griffin says the two sons are totally distinct personalities – Taylor is more quiet and laid back, while Blake is outspoken and more of a cut-up.  But on the basketball court, the younger Griffin is all business.

“He’s always had dreams and aspirations of doing well in whatever he’s doing and when he was younger, his favorite sport was whatever he was playing at the time” said Tommy Griffin.”  He played football and basketball when he started high school but after his ninth grade year, he decided he didn’t just want to come in and be that far behind in basketball.  But he loved football.”

“His abilities – it’s a God-gift.  He has the ability to do so many good things and he has done a lot of things for our team. I mean, when it’s tight, he’ll take the ball – he can handle the ball well.  The only thing we’re working on right now in terms of improving would be his outside shot, because that’s important to him.  And when I say outside, I’m talking about a three-pointer.  His sophomore year he shot 31 per cent.  This past year he shot right around 29 per cent.  But normally those shots were at the end of the game, because he’s never afraid to take a shot.”

“His potential level hasn’t been reached yet.  I think when he gets to college and he can focus on one thing and one thing only, instead of getting to play all the positions, he will really start to blossom.”

For his part, Taylor was in somewhat of an awkward position in Blake’s recruiting process.  Some people just assumed little brother would go to the same school as big brother, while many others thought that was exactly the reason Blake would not go to OU.  Taylor was there to offer advice only if it was requested.

“When he was first being recruited hard by all the schools because I’d gone through the process just two years earlier, I told him whenever you have questions, whenever you don’t know what to do or what to ask or what to talk about with a coach, just talk to me and I’ll tell you what I did or what I think the best situation”, Taylor said. “Early on we didn’t really talk about it a lot, like the whole recruiting process. But then, as it came down to I guess this past summer, we did.”

“You know, there was a point when Duke came calling and North Carolina, UConn, some of those schools, came into the picture, I wasn’t for sure what he was going to do, because those are some good schools.  But I kind of stood up and stayed out of the picture for the most part until the last few weeks or so before he committed.  I told him that I would love to play with him again, Coach Capel’s got a great thing started up and I just told him that OU is a good school to play at.  Also, it’s your home state which is a big plus, I think.”

In the end, that point won out over the marquee schools and ensured that the brothers would have a chance to play together again.  That prospect has Blake wishing he could come to OU right away, but he is also realistic about where he is in his development.

“It really does, it makes me want to get to college a little quicker”, Blake admitted. “But I know I have to wait another year and that’s good, because I need to take a little more time to mature.”

Some worry that Blake Griffin won’t be tested night in and night out by the competition at his high school level. OCS dropped from 3A to 2A last season, but the result remained the same as they won the state title for the third straight season, with Blake averaging 21 points and 14 rebounds per contest. While observes expect a 6-9, 230 player to dominate at that level, his father says he never worried that playing at a smaller school would hinder either of his sons.

“To be totally honest with you, I was never ever concerned with whether they played on a larger stage or a smaller stage.  I think basketball is basketball.  There are so many good talents on that lower level”, said Coach Griffin. “But I never worried about whether they were playing 5A or 6A because every summer they’re playing against some of the best in the nation in AAU ball.  So there’s a combination of everything involved there. As far as the class is concerned, I don’t think there’s that much of a difference.  You’re still going to run into some pretty good teams and pretty good individuals.”

Blake has drawn most of his attention the past two summers playing for Athletes First, an Oklahoma AAU team that also includes his fellow OU recruit Davis. It was during the tough summer competition against the top players in the nation that the younger Griffin realized he belonged at that level.

“There were two tournaments last summer that just kind of built a lot of confidence for me.  One was the tournament over Memorial Day and I went up against a couple of seven footers and players like Greg Monroe a couple of games in a row and felt like I did a decent job against them”, Blake said. ‘That just gave me some extra confidence and we made it to the final four of that tournament.  That kind of gave me a boost and also the Nike Peach Jam in Atlanta, I started playing a little bit better offensively.  That just kind of put me over the edge to where I felt like I could play with more of these guys.”

After a summer of banging against the nation’s elite high school players, Blake returns to OCS to play for his dad one last time.  And he has some definite goals for his senior season.

“Just coming out and having a great year and coming back and winning another state championship and then hopefully making the McDonald’s All American Team”, said Blake. “Definitely want to get a state championship first, but it’s been another big dream of mine to play in that game.”

And another dream has been to play in the NBA.  Now that he has made a college choice and is preparing for the next step, that dream is starting to come into focus.  For his father, the thought of have a son – or possibly two- play professionally – is not foremost in his thoughts right now.

“I hadn’t really thought about it.  The most important thing to me is that they get their education.  And if they can stay and get their four year education, everything else is just going to be a matter of adding something better to the pot”, said Tommy Griffin.  “I know Taylor definitely understands that he wants to get his degree and I think he still wants to be in medicine, he still wants to be an orthopedic surgeon.  I believe Blake has always had a dream of playing in the NBA. Taylor would love it, but Blake has a dream for it.”

First, Oklahoma fans would like to see him put his talents on display in Norman for a few years.  They’re hoping, along with Coach Capel, that the brothers’ reunion will bring the kind of prosperity to the Sooners program that it has to the family’s basketball fortunes.

In two seasons, Griffin turned the college basketball world on its ear, making tremendous improvement and bringing an explosive energy that hadn’t been seen in recent years. Oklahoma would make it to the Elite Eight in his sophomore year, before Griffin decided to turn pro.  He became the number one overall pick in the NBA draft, missed his first season due to injury, and then grabbed Rookie of the Year honors when he returned.  Now he has the Clippers in position to challenge for the NBA title and we wait for the next chapter of Blake Griffin’s story to be written. 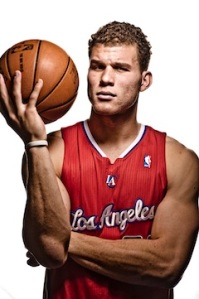 One thought on “Blake Griffin – Before He Was World Famous”