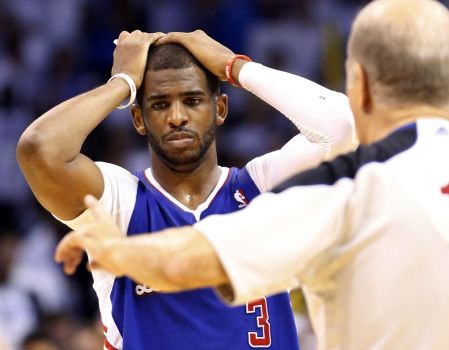 Of course, things were always better back in the day and you come off sounding like an old fuddy duddy when you bemoan the fundamentals (or lack thereof) in today’s NBA.  But the real basketball purists – Charles Barkley and Kenny Smith –  have had enough. And so have I.

The comedy of errors in the last minute of Oklahoma City’s win over the L.A. Clippers was mind-boggling, especially since a number of them were committed by arguably the best point guard in the league, Chris Paul.  We’ve come to expect unorthodox plays from The Human Torch, aka Russell Westbrook or Dum Dum Number One, according to the Chuckster.  However, when CP3 (Dum Dum Number Two) pulls not one, not two, but THREE bonehead plays in the final minute to help lose the game, it’s time to reflect.

Throughout the years, new things come into vogue.  For a while, it was headbands – still championed by Lebron James and the resurrected Al Harrington.  Then it became shooting sleeves.  And now, apparently, it’s fouling guys taking three point shots. There have been an unprecedented number of fouls committed on out-of-range shooters in the playoffs and an equally unprecedented number of three-and-one plays as well.

Last night, Paul may have flicked Westbrook’s elbow on a likely unmakeable three, but the bigger sin was even coming close enough to get called for a foul. Repeat after me.  You should never foul a jump shooter.  Especially when he is five feet beyond the arc.  You deserve whatever happens when you do.

And I’m not even going to get into the Reggie Jackson bail out, when he ignored the obvious dish opportunity on a three-on-one break and tried to be the hero.  Why Matt Barnes was reaching in made no sense, whether or not it was the worst call in playoff history (Doc Rivers) or if it was the proper call per the suddenly read by everyone on the planet NBA rule book (highly unlikely). It was a stupid play all around.

Some people consider the Thunder-Clippers matchup a great series. Right now, I consider it a battle of half wits, which is better than no wits, I guess. The winner of the series?  The team that doesn’t go completely brain dead down the stretch like both have done in games four and five.