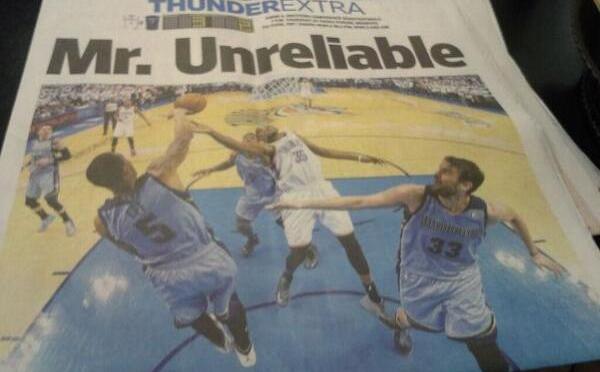 The world was in a uproar over a headline in the Daily Oklahoman from Thursday morning that dubbed Kevin Durant as “Mr. Unreliable”. It was perched above a column by Berry Tramel that opined about the Oklahoma City Thunder star’s struggles in the playoff. Newspaper columnists and reporters don’t write the headlines – there’s a whole separate crew responsible for that – but they do suffer the wrath of those headlines from the reading and non-reading public.

That headline went through a three-step approval process and no one along that line, including the top newspaper brass, objected to the two words that rocked the state and the sports nation.  I will have to admit I was surprised to see what was screaming from the top of the Thunder Extra, given that the local paper is usually one of the biggest cheerleaders on the planet and never courts controversy unless it occasionally deals with who is feeding who fried chicken and whether someone is qualified to be a man at the age of 40.

But despite my raised eyebrows, I didn’t see a problem with the headline although I knew the great majority would.  In fact, if it had included a question mark at the end, it would have probably weathered the thunderstorm of criticism that followed.

What I did have a problem with was the apology from Oklahoman Sports Editor Mike Sherman.

Oh, I don’t have a problem with Mike.  I have known him since his days as a cub reporter, have respect for his honesty and dedication, and I even sat next to him at Tuesday’s Thunder-Grizzlies game in OKC. In fact, our kids will probably be attending the same school this fall.

However, one thing you never, ever, ever do in the world of journalism is apologize for a stand you took on a particular story of theme. What it implies is that you don’t have the courage of conviction to stand behind what you believe.  And the apology likely caused the Oklahoman more embarrassment as the day continued than the original headline.  Stick to your guns, take your medicine and live to fight another day.

I’m sure the pressure to apologize came from the top office, after getting a number of calls from advertisers and possibly from one of the Thunder owners who just happens to be the son-in-law of the old newspaper owners.  But this is where the editorial side needed to bow up and say “No, we got this.”

In fact, given Durant’s public response, which was that it was no big deal, and his on court response, which was to throw up a big FU in busting out to a 14 point first quarter en route to a 36 point explosion, the Oklahoman could have taken some credit for his turnaround in the series with a Friday headline saying “I Guess We Were Wrong” (and so was I).

While the newspaper will probably have to scuttle a pending special Thunder edition they were trying to sell in the upcoming weeks due to adverse response to the headline from irate advertisers, at least they were relevant again for a day.

Just remember next time, don’t say it if you don’t mean it.  And own it once you do say it.