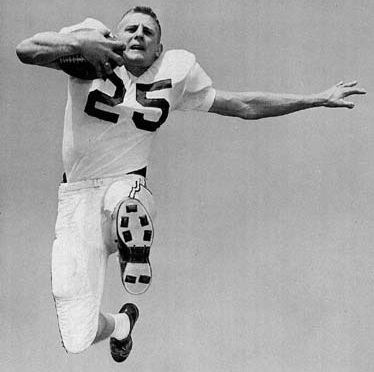 Spend five minutes with Tommy McDonald and you almost expect the 79-year old Sooner legend to buckle his chin strap and jump back onto Owen Field, ready to score another touchdown.

The years have done nothing to diminish McDonald’s enthusiasm about life and about his days with the greatest teams of the Bud Wilkinson era at Oklahoma.  McDonald grew up in New Mexico, but says he’s an Oklahoma boy at heart.

“It was a great four years of my life from 1953 to 1956. I mean, I never lost a college football game.  Only 17 of us can ever say that,” said McDonald, referring to his teammates who went through their careers during the Sooners NCAA record 47-game win streak.  “I can still hear Boomer Sooner and that stadium- I had never seen a stadium that full.  The Oklahoma fans were marvelous. I can’t say enough about them.  They always tried to make you feel at home.”

As a 5’9, 147 lb. halfback growing up in a the tiny town of Roy, NM, McDonald never dreamed of playing in front of thousands of fans. But when his family moved to Albuquerque and McDonald became the focus of Highland High Schools single-wing offense, his fortunes began to change.  Where would have McDonald’s life have taken him if he had stayed in Roy?

“My little rear end would have been on a tractor planting wheat,” joked McDonald.

Instead he wound up being All-State in football, basketball and track, but was still largely ignored by major football schools until Oklahoma basketball coach Bruce Drake spotted him in an all-star game and recommended that Wilkinson give McDonald a look.  Meeting Wilkinson was all it took for McDonald to choose the Sooners.

“Bud just overwhelmed you with his personality,” said McDonald.  “As soon as I met him, something clicked that said ‘you’d better go here’.  He was just so far ahead of everybody else at that time.”

McDonald credits Wilkinson’s innovative Split-T offense, a great coaching staff and an abundance of talent for Oklahoma’s magnificent performance during his three varsity years.  But the dominance of those Sooner teams  created problems for players when it came time for post-season awards.  Rarely did starters play more than half the game, as Wilkinson often platooned his first and second teams in alternate quarters.

Still, McDonald was able to garner the prestigious Maxwell Award and The Sporting News Player of the Year and finished third in the Heisman following his senior season despite getting only 110 carries during the season.

Midway through that 1956, OU had just rolled to a 40-0 win over Notre Dame and had outscored their first five opponents 223-12, recording four shutouts.  But in their sixth game at Colorado, in front of a national television audience, the Sooners found themselves trailing the Buffaloes 19-6 at halftime.  That’s when the most memorable moment of McDonald’s career took place.

“Coach Wilkinson came into the locker room and told us ‘You don’t deserve to wear that jersey today.  You’re letting that jersey that jersey down’,” remembered McDonald.  “He went on to talk about all the players that had built the program and how we were letting them down as well.  I don’t think they had to open the door after he got through.  We just about ran through the wall trying to get back on the field and Colorado couldn’t do a thing in the second half.  We scored 21 straight points and wound up winning 27-19.”

Capping his collegiate career by grabbing MVP honors at the North-South All-Star game, Mc Donald caught the eye of the Philadelphia Eagles, who picked him in the third round of the NFL draft.  At the time, pro football hadn’t yet taken over the nation’s interest, and McDonald did have his teaching degree from OU to fall back on.  Even though the $12,000 the Eagles offered him doesn’t sound like much now, it beat the $2,200 a year he could have earned in the classroom.

Early in his rookie year, McDonald was lost in the shuffle at running back and was primarily a kickoff and punt returner. But an injury at wide receiver prompted Eagles coaches to give McDonald a look at wide receiver, and in a game against Washington, he scored two touchdowns. He went on to have a Hall of Fame career, played on the 1960 Philadelphia NFL championship team and spent 12 years in the league with the Eagles, Rams, Falcons, Cowboys and Browns.  In 1962, he was featured on the cover of Sports Illustrated as having football’s best hands.

In 1998, he was elected to the Pro Football Hall of Fame, becoming only the second Sooner player to receive the honor, following Lee Roy Selmon’s induction just a few years earlier.  His appearance in Canton was memorable, as he stole the show by chest-bumping fellow inductees, and made an unforgettable speech.

He cracked jokes about his wife and tossed his 25-pound bronze bust around like a football. He talked to his father and Ray Nitschke, whose ghosts he claimed were standing on stage with him.

McDonald trumped that by pulling a radio out of his briefcase and dancing to disco music on the hallowed steps of the hall, live on national television.

Following his pro career, McDonald returned to the Philadelphia area, where his Tommy McDonald Enterprises supplied portraits to Heisman Trophy and Miss America winners, among others.

“I can’t praise God enough for letting me be in the right place at the right time,” McDonald said. “He kept me healthy.  I never got hurt in high school or college and missed only three games in the pros. And I can’t say enough about the people of Oklahoma.  They are awesome” 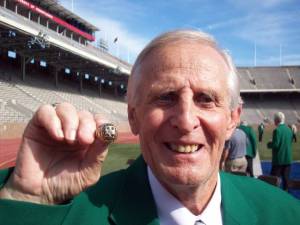