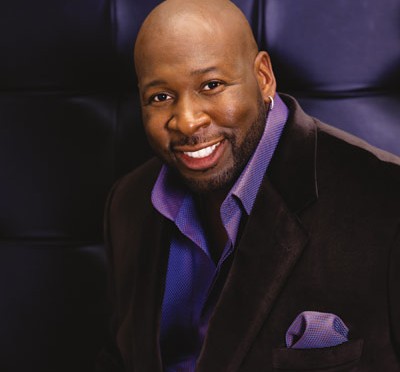 May 15 marks the fifth anniversary of the death of one of the greatest human beings to ever walk the earth.  We lost Wayman Tisdale far too early at the age of 44, but his spirit and love for life stays with us today.

I first met Wayman when he was an awkward teenager at Booker T. Washington High School, yet to develop all the gifts he had been granted.  What a pleasure it was to be able to have a front row seat as he developed into one of the best basketball players in the history of college basketball and as he became one of the greatest ambassadors the state of Oklahoma could have.  His musical talents, which actually were far more developed in his youth than his basketball skills, also became a primary part of his professional life.

Although he didn’t have the type of NBA success he may have wanted, Wayman took another road and became a well-respected and much loved jazz musician, working with some of the top performers in the industry.  His smile remained as broad as the ocean and his handshake as strong as his love for his family, his state and his music.

The last time I had a chance to visit in depth with Wayman came just a year before his passing.  He had survived cancer’s first attack and had not yet seen the relapse that was to come.  As always, his spirit was infectious and his grace was immeasurable.

There haven’t been too many bumps in the road for Oklahoma basketball all-time scoring leader Wayman Tisdale.  Since he was a freshman in high school, Tisdale has traveled a fairy tale path – from prep superstar at Tulsa Washington to three-time All-American at Oklahoma, the Olympic team, a decade long pro career and into a post-retirement career as a top-selling jazz musician.

But this past spring, Tisdale experienced one of the few setbacks in his life.  Last may, he fell down a flight of stairs in his home and while doctors were doing X-Rays to determine the damage to his knee, they found a cancerous cyst in his fibula.   Following removal of the cyst, Tisdale had to cancel his music tour and start chemotherapy to treat the cancer.  Once again, it appears Wonderful Wayman has come out on top.

“Everything is great.  I’m pretty much done with the treatments and back out on the road,” said Tisdale. “So I’m feeling great and everything is pretty much behind us.  I had to curtail my touring most of the summer but I was able to go back out this winter.”

Tisdale just completed a Christmas Jazz Cruise in January to Aruba and Curacao and his latest CD, Way Up, debuted at #1 and spent 30 weeks in the top 10 on Billboard’s Contemporary Jazz charts.

He still has the infectious smile, the outgoing personality and the easy going nature that made him a fan favorite in Norman while he was becoming the most decorated player in Sooner history and helping to build a budding dynasty for coach Billy Tubbs.  Tisdale was the first player to be named first team All-American as a freshman, sophomore and junior and he holds virtually all of the Oklahoma scoring records.

“It was a long shot when I first went there.  I had a lot of people trying to tell me not to go to Oklahoma, but that didn’t matter to me,” Tisdale said. “What mattered is that I was going to get to play as a freshman and pretty much get the program handed over to me and you just can’t find that anywhere else.”

It was instant stardom for Tisdale, who averaged 24.5 points as a freshman and 25.6 for his three year career.  He led the Sooners within a game of the Final Four on two occasions and built the foundation for Tubbs’ teams that would later on make it to the NCAA championship game.  And he was the leading rebounder for the 1984 U.S. Olympic Gold Medal basketball team coached by Bob Knight.

From there, Tisdale became the number two overall pick in the NBA draft behind Patrick Ewing and went on to a 12 year career with the Indiana Pacers, Sacramento Kings and Phoenix Suns that saw him average over 15 points a game and score almost 13,000 points.  In the latter stages of his career, Tisdale released his first musical effort, Power Forward, and showed his teammates and the world that he was serious about a career in jazz after basketball.

He had played the bass in his father’s Tulsa church as a youngster, but when he began to grow and basketball became his calling, Tisdale put music on the back burner.  He still played from time to time, with many people considering it a hobby or a novelty.  However, Tisdale was just as serious about music as he was about basketball.

“Ninth grade, I started sort of excelling in basketball and had to put the bass down then.  Never really put it down completely,” said Tisdale. “I just never really did practice as hard on the bass until maybe my eighth or ninth year in the league, I really got serious about it.”

“I got harassed a lot by (my teammates), you know.  But I knew what I wanted to do, I was focused and didn’t let a lot of people deter me in what I wanted to do.  Sometimes I went overboard because I was spending so much time doing it, but other than that, it was all out of the love.”

The big lefthander released two CDs that were critically acclaimed before he decided to retire after the 1997 season.  Now, Tisdale was making the transition from basketball star that happened to play music to full-time musician.  How was he perceived in his new world?

“Pretty much from day one, they really embraced me on the music side,” said Tisdale. “I guess my sound is so different and so new that it kind of took off right away when they heard my playing. It just been a blessing to come from one world into another and be pretty much successful, so I don’t take that for granted at all.” 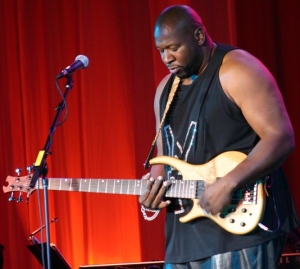 “I always wanted to do it and always aspired to do it, and I knew what kind of work it was going to take after being successful at basketball, knew that I was going to have to work just as hard or harder to make it in music, so why can’t I?  That was the theory I used and it just came about.”

“It took lots of discipline.  I listened a lot, too. I listened to a lot of advice.  I bumped my head a lot of times, too, but even though I bumped my head I still took the advice and kind of just went from there and things just started to fall in place after a while.  There’s no substitute for hard work and that’s what I’ve been taught and done the whole time.”

Tisdale has released seven solo albums to date.  In 2002, he was inducted into the Oklahoma Jazz Hall of Fame and received the Legacy Tribute Award. He was also nominated by the NAACP as “Outstanding Jazz Artist” for its 2004 Image Awards.

He has also kept a connection to his home state, commuting from his farm home near Tulsa to his business interests in Los Angeles.  Tisdale and his wife, Regina, have four children and his Tulsa home includes a stocked pond so he can indulge in another passion – fishing – while helping in the garden and horseback riding with his son. Outside of the home, Tisdale regularly takes Tae Bo with Billy Blanks, calling it his new addiction and the best workout since playing in the NBA.

“We’re back home and enjoying the farm life and I’m traveling probably more now than ever,” noted Tisdale.  “Things are just moving right along.”

For a couple of years, Tisdale returned to OU to do color commentary on Sooner basketball television broadcasts, but his music success forced him to give up that job.  He still takes a keen interest in the program.

“My schedule is just really busy, pretty much all year round now, so I wasn’t able to do it.  I really enjoyed doing that.  I loved that,” said Tisdale.  “The program is kind of rebuilding now and it’s getting to where it needs to be.  It still has a long way to go, but it’s a good start and they’ve got some good foundation to do it with.”

A big part of that foundation is freshman center Blake Griffin, who some are touting as the second coming of Tisdale.  Even though Tisdale was the first OU player to have his number retired, he agreed to allow his number 23 to be reinstated so that Griffin could wear it this year.  Griffin is off to a great start, but still has a long way to go to reach the numbers that Tisdale compiled, even though Tisdale hopes the 6-10 youngster can reach those heights.

“I’d rather that he be better than me.  I know that he’s gonna be a great player and I’m going to be wishing him all the best”, said Tisdale. “We need to get him to average about 10 or 15 more as a freshman.  But he’ll be alright.”

And while Tisdale is doing just fine in his latest career, he still would like to stay involved in the sport that gave him a chance to reach a national audience and he took the opportunity to lobby for yet another job.

“You know, I’m interested if the Sonics come to Oklahoma City, I’m definitely interested in working in some capacity”, Tisdale said. “Not as a coach or anything but front office work. Community relations.  I think I’d be good at that.  My face would look good on that.”

It’s hard to believe that it has been 25 years since the smiling youngster from Tulsa showed up on OU campus and put Sooner basketball on the map.  Tisdale plans to keep moving and putting a smile on the face of everyone he touches.  As far as he’s concerned, that’s just part of the plan.

“I think everybody’s life is orchestrated.  We’ve just got to follow the blueprint”, said Tisdale.  “I feel that I’ve been dealt a pretty great blueprint and it’s just been a blur for me.  It hasn’t stopped going since before I got to OU.”

Sadly, there would be no storybook ending to Wayman’s story. Shortly after this interview, the cancer returned with a ferocity that required the amputation of his leg.  Still, Wayman battled back through rehabilitation, but the signs were there that this was a battle he would not win.  Eventually, he succumbed to the disease.

His memory lives on with the Wayman Tisdale Award, given to the top NCAA freshman each year.  And his wife Regina battles on, still cherishing her husband’s memory and struggling to deal with such an enormous void.  We share her memories and we, too, still can’t believe that he’s gone. 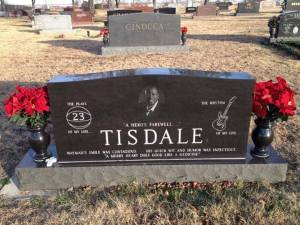